Charles (Charlie) Gordon Gross, professor of psychology and the Princeton Neuroscience Institute, emeritus, who revolutionized the understanding of sensory processing and pattern recognition, died April 13 in Oakland, California. He was 83.

Gross was one of the founders of the field of cognitive neuroscience. His pioneering discoveries of brain cells that are especially sensitive to perceiving faces and hands led to an entire new field of research. He worked at Princeton for 43 years, from 1970 until he transferred to emeritus status in 2013. Even after retirement, he continued traveling, publishing and teaching his popular “Neuroethics” course (most recently offered in fall 2018).

“Anyone who knew Charlie will remember that he was full of energy and enthusiasm,” said Asif Ghazanfar, a fellow professor of psychology and PNI. “After his retirement, he continued to travel all over the world, to far-flung places — often with his former students — to give talks, meet new people and take photographs. Charlie will be missed dearly, but his spirit lives on in the many people with whom he befriended, mentored, supported and collaborated.”

Gross was born in Brooklyn, New York, on Feb. 29, 1936. In 1950, he became Brooklyn’s youngest Eagle Scout, and he received his A.B. in 1957 from Harvard University and his Ph.D. from the University of Cambridge in 1961. He is a member of the National Academy of Sciences and a foreign member of the Brazilian Academy of Science, and he has served as a visiting scholar more than a dozen times, at universities from Oxford to Beijing to Warsaw’s Nencki Institute.

He wrote more than 300 articles as well as several books, including “Brain, Vision, Memory: Tales in the History of Neuroscience” in 1999 and “A Hole in the Head: More Tales in the History of Neuroscience” 10 years later. He specialized in the primate visual system and revolutionized scientists’ understanding of sensory processing and pattern recognition.

One of Gross’s greatest early discoveries was finding the small proportion of cells that respond best or only to faces, and the even smaller number that respond specifically to hands. The first discovery was serendipitous — after a frustrating series of light stimuli failed to interest his primate subjects, he waved a hand in front of them and suddenly observed a vigorous response from the previously unresponsive neuron. He then tried other shapes, and got stronger responses to the ones that resembled hands. The discovery of face-sensitive neurons came later. Throughout his career, Gross studied neurons in the inferior temporal cortex of the brain, analyzing their visual functions as they relate to perception and learning.

Many of his colleagues cited his commitment to fostering young scientists — students, postdocs and junior faculty — as one of his greatest legacies. The warm relationships Gross fostered with his young colleagues reached outside the lab to include pig roasts in his backyard, canoe trips, hikes and travels to every corner of the globe, including Antarctica, Brazil, Cuba, Mongolia and Uganda.

“No other neuroscientist of the 20th century produced so many future leaders,” said Sabine Kastner, also a professor of psychology and PNI, citing MIT’s Robert Desimone and Earl Miller, Stanford’s Tirin Moore, Princeton’s Michael Graziano and the Salk Institute’s Thomas Albright among many others. “The ‘tree’ that Charlie started is just brilliant.”

“He mentored an incredible group of progeny, many of whom are now luminaries of systems neuroscience,” said Doris Tsao, a neuroscientist at Caltech.

Miller, a 1990 graduate alumnus who is now the Picower Professor of Neuroscience at MIT, said: “He was more than my professor. He was my proverbial fork in the road. He taught me how to think like a scientist and changed my life.”

Oates and Gross visited the residence of the ambassador to Rome in 2011.

Albright, a 1983 graduate alumnus and the Conrad T. Prebys Chair in Vision Research at the Salk Institute, wrote this in a 2013 essay, Travels with Charlie: “Charlie is … deeply loved by the generations of students and colleagues with whom he has worked. We love Charlie for his wit and wisdom; for the passionate joie de vivre that fills his personal and professional spheres; for the devotion he extends to his students, their work, and their lives; for a certain (often bizarre) unaffected goofiness and unpredictability; and for those seemingly stray provocative comments that tilt the frame of your world.”

In addition to his teaching, mentoring and research, Gross was an enthusiastic photographer, finding inspiration on many of his travels. “Charlie and I were traveling companions and saw much of the world together,” said Albright. “We ran highly successful workshops on neuroscience for students in developing countries including Cuba and India. We made a contact with the science ministry in Mongolia last summer and were beginning to plan a workshop in Ulaanbaatar.”

“Charlie was more than a world-class scientist — he was a warm, funny, and generous colleague,” said University Provost Deborah Prentice, the Alexander Stewart 1886 Professor of Psychology and Public Affairs. “At one point, when I was chair of the psychology department, I was looking for artwork for my outer office. Charlie gave me a framed photograph he had taken of a mountain gorilla looking directly into the camera. Charlie said he thought people should have to look that gorilla in the eye before they were admitted in to see the department chair. I love that photograph — it hangs in my office to this day.”

In 2009, Gross married bestselling author and fellow professor Joyce Carol Oates, Princeton’s Roger S. Berlind ’52 Professor in the Humanities, Emeritus and an honorary member of the Class of 2019. She taught creative writing at Princeton for four decades, transferring to emeritus status in 2014. 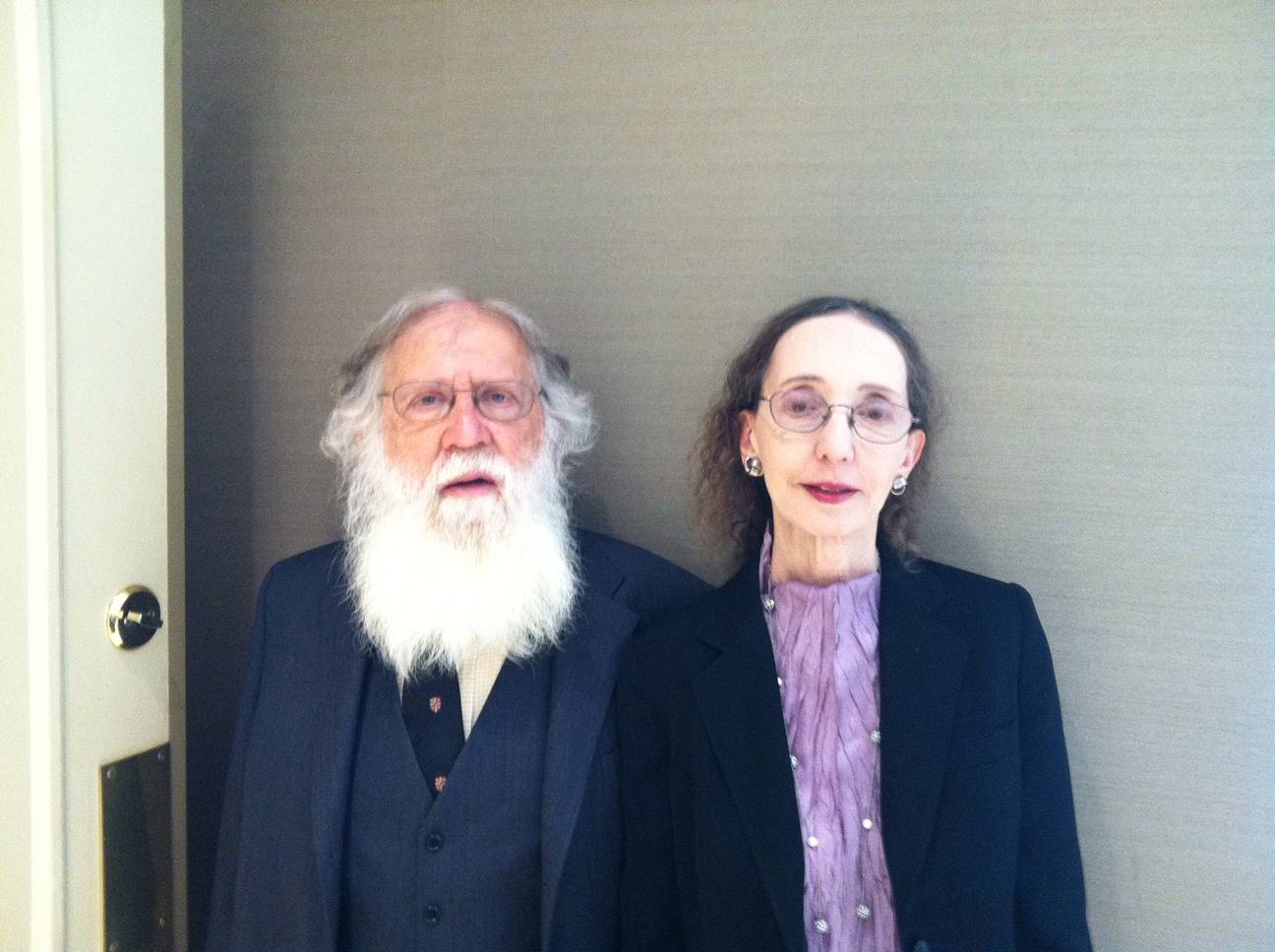 Gross in a suit was “an unusual sight,” said Oates.

“Though Charlie and I shared adjacent buildings, Charlie in Green Hall (psychology) and I at 185 Nassau (creative writing) and a parking lot in common for more than 20 years, we did not meet until, on Aug. 31, 2008, a mutual friend introduced us at a gathering for the philosopher Harry Frankfurt,” said Oates. “Since that evening, until the hour of his death (April 13, 2019, 2:30 p.m.), we had been virtually inseparable except for Charlie’s occasional trips to far-flung places — China, India, Antarctica — where I had not the stamina to accompany him. Charlie’s exuberant spirit, his seemingly indefatigable energy, his respect for intellectual and artistic achievement, his zeal for the pursuit of truth and social justice, his kindness, generosity, sense of humor, intelligence, and good taste are legendary to those who knew him.

“At the time he was stricken with his final illness he had plans to travel to Israel, New Zealand, Tahiti and Bora-Bora,” Oates continued. “Not surprisingly, but very movingly, Charlie cared for his students — in recent years, his undergraduates in such courses as ‘Neuroethics’ and ‘History of Neuroscience.’ He spent hours in conference with them, helping them prepare seminar presentations that seemed, to me, the equivalent of graduate school work; for this, he was rewarded by extraordinary course evaluations.

“Over time, Charlie became a trusted first reader of my work, whether fiction, essays, poetry — he was both a meticulous reader, with the unsparing eye of a scientist for accuracy, and a sympathetic reader. He will be missed — terribly.”

Gross is survived by Oates, his daughters Melanie Hagen and Rowena Gross, grandsons Samuel and Noah Hagen, and sister Betsy Gross. Memorial donations are invited to be made to the American Civil Liberties Union and Doctors Without Borders.

View or share comments on a blog intended to honor Gross’ life and legacy.