In a whirlwind 24-hour visit to Princeton on April 8 and 9, Maria Ressa, a 1986 alumna and CEO and executive editor of the Philippines-based online news organization Rappler.com, spoke with students, faculty and the campus community in forums large and small. She also felt safe — which is not her everyday modus operandi.

Ressa co-founded Rappler six years ago and has worked as a journalist in Asia for more than 30 years since accepting a Fulbright Fellowship in the Philippines after graduating the same year as the People Power Revolution in that country. Recently, Rappler’s reporting on the authoritarian administration of President Rodrigo Duterte has spurred repeated intimidation tactics by the government to discredit Ressa and the media outlet. She has posted bail eight times and been arrested twice, most recently at the Manila airport on March 29 after a trip to San Francisco. Displaying her signature resilience and determination to shine a spotlight on the government’s harassment, she told audiences throughout her visit: “I tweeted from the back of the police car.”

Ressa has been honored around the world for her work in fighting disinformation, fake news and attempts to silence the free press. In 2018, she was named TIME magazine’s “Person of the Year” and won the prestigious Golden Pen of Freedom Award from the World Association of Newspapers and News Publishers. She is the author of two books, “Seeds of Terror: An Eyewitness Account of al-Qaeda’s Newest Center of Operations in Southeast Asia,” and “From Bin Laden to Facebook.”

Ressa tucked in a visit to Princeton on her way to the 10th annual Women in the World Summit in New York City, where she will be a featured speaker alongside other female journalists to discuss combatting misinformation and speaking truth to power. On April 8, Ressa met with students and faculty in the Program in Journalism over dinner and sat with The Daily Princetonian staff for an interview. On April 9, she met with President Christopher L. Eisgruber; followed by a meeting with Dean of the College Jill Dolan; had a lunchtime talk and Q&A with students co-hosted by the Office of Communications, the Woodrow Wilson School of Public and International Affairs and the journalism program; and recorded a pending episode of the “She Roars” podcast, which spotlights the voices of change-making women at Princeton.

Tom Weber, a 1988 alumnus and contributing editor of TIME, opens the Q&A, asking Ressa what she took away from her Princeton education and her advice for students. Using her smartphone, Ressa livestreamed the talk to a closed group of about 300-400 Rappler.com followers.

The power of fact-based journalism

In her talk “Fighting Back with Data,” Ressa spoke with students in Robertson Hall, demonstrating how Rappler has harnessed data from social media to root out and expose how authoritarian regimes like Duterte’s threaten the foundations of democracy. Noting that 97% of Filipinos on the internet are on Facebook, she said “we are a petri dish” for how social media can be used to manipulate audiences.

“A lie told 1,000 times becomes the truth,” Ressa said. “If you want to rip the heart out of a democracy, you go after the facts. That’s what modern authoritarians do. You lie. All the time. Then, you say it’s your opponents and the journalists who lie.”

Repeating a quote she used in an interview with Al Jazeera, Ressa said, “If you can make people believe lies are the facts, then you can control them.”

Projecting a series of data visualizations on the screen, Ressa illustrated the nearly instantaneous speed with which attacks on the media spread globally via Facebook and Twitter. For example, after Rappler published a conversation between President Trump and Duterte, a hashtag campaign #ArrestMariaRessa was created by an account in the Philippines, then jumped to other countries via social media posts. Inflammatory tweets laced with hate language about Ressa traveled around the world.

Ressa said she and her newsroom, which is staffed primarily by women, continued to stand firm in their resolve against a misogynous regime: “We did not duck, we did not hide. We are Rappler and we will hold the line.”

Tom Weber, a 1989 alumnus and contributing editor of TIME, opened the Q&A, asking Ressa what she took away from her Princeton education and her advice for students.

“You won’t appreciate Princeton until you are out,” Ressa said. Noting that she started as a pre-med student but switched her major to English with a certificate in theater and dance and wrote a play for her senior thesis, she said: “Always make the choice to learn. What Princeton taught me was whatever mess you are studying, pull a thread with great persistence ‘til you have clarity of thought. Princeton taught me how to solve a problem. How to think — that’s what we pull out of this place.”

Weber asked, “What needs to happen, given those sober data visualizations you showed?”

Ressa, who formerly worked as CNN’s lead investigative reporter charting terrorist networks in Southeast Asia, said: “Social media is a new weapon against journalists.” Rappler uses data to combat that intimidation. Rappler is one of Facebook’s fact-checkers. “Once we fact-check a story, we can then look at the network that spreads the lie. We can chart the networks [across social media platforms],” Ressa said. She noted it’s essential that platforms including Twitter, Facebook and YouTube “be far more transparent and put data in a place where we can correlate [it]… We need a global Interpol.”

After asking for a show of hands of how many audience members were on social media — and nearly everyone raised their hand — Ressa said: “When you’re on social media, your brain is being rewired. Dopamine [the “feel good” hormone] kicks in when you’re on social media. Facebook has 2.5 billion accounts. That’s how things spread so fast. And the engineers optimize to keep you on-site. … This is bad for democracy…. They’ve atomized everything. [That] needs to be complemented by the humanist approach.”

In her closing comments, Ressa encouraged the students to be intentional about their use of social media. “The fight for human rights is at the core of liberal democracies,” she said. “This is critical to your future. You have the intellect, the time and I hope the idealism to fight this. My survival in the Philippines is all depending on how we shine the light and that’s driven by you. That’s the reason I came here. Thank you. This helps our battle.” 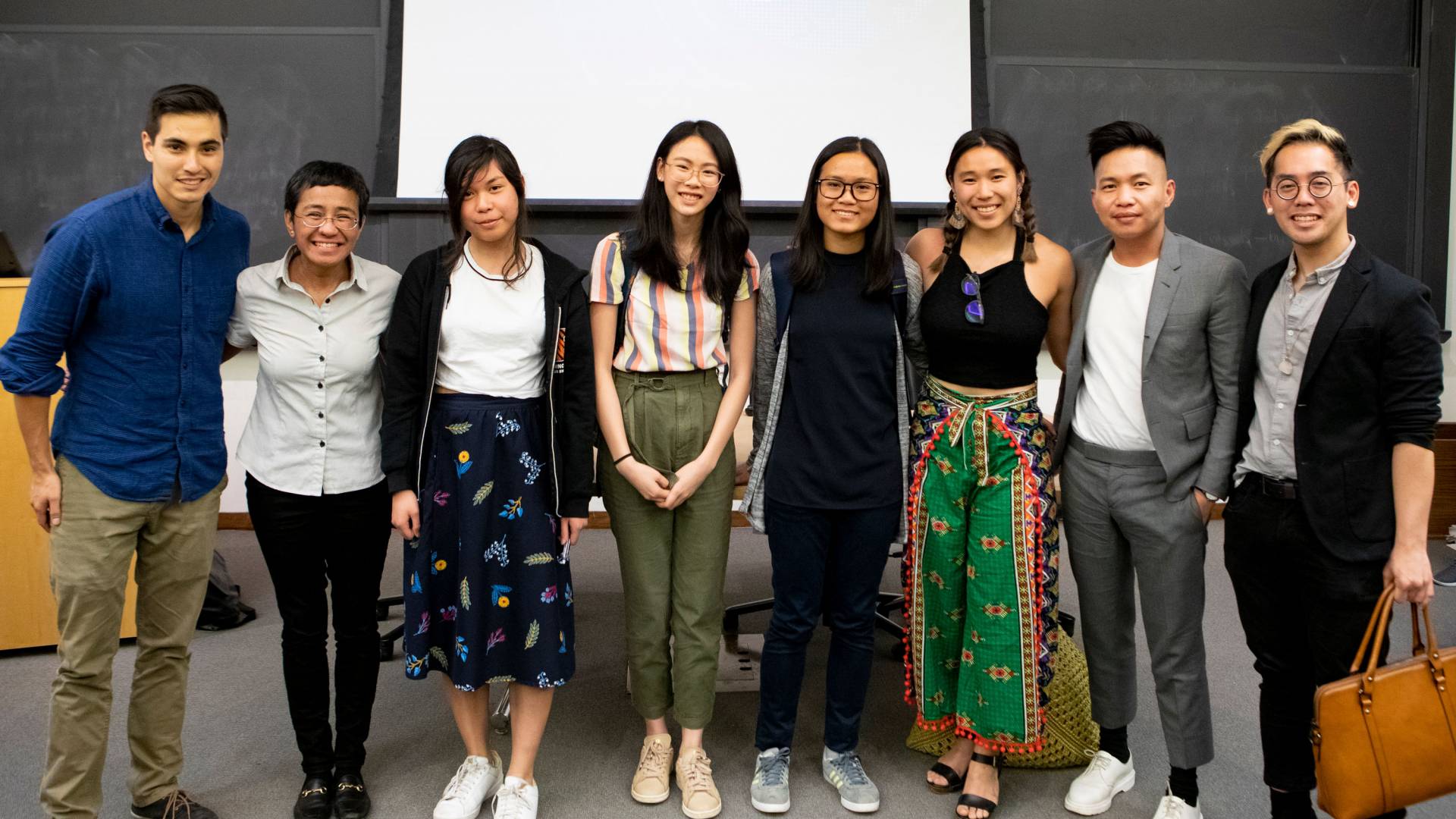 Ressa enjoys a moment with undergraduate and graduate students and faculty after her talk.

‘Shine light on the truth’: Reflections from across the campus community

Ressa’s visit drew engagement from across the Princeton community.

Paul Nadal, a postdoctoral research associate in the Program in American Studies who will join the Princeton faculty in September as an assistant professor of English and American studies, attended the lunch event with some of the students in his “Introduction to Asian American Studies” class.

“We just finished reading Gina Apostol’s “Insurrecto,” a novel about the Philippine-American war and the challenges of representing that war because of the trauma it represents and because of the collective forgetting that transpires on both sides of the Pacific,” said Nadal, who was born and raised in the Philippines and has many family members there. “I think both Apostol and Ressa share a similar conviction about the need for Filipinos and other Asian Americans to tell our stories, to speak out and to shine light on the truth.”

Cero Perel, a graduate student in the Princeton Neuroscience Institute, said he was excited to meet Ressa in person, having corresponded with her on email and social media in connection with his work with the New Jersey chapter of the International Coalition for Human Rights in the Philippines (ICHRP-NJ). Perel, who was born in the Philippines and grew up in a working-class family in Kentucky, said, “While my work with ICHRP-NJ is not directly connected with my Ph.D. work in neuroscience, I see both my academics and activism as part of a larger mission to give back to the Filipino community.”

Marissa Michaels, a first-year student who plans to pursue a certificate in journalism, attended the talk and the dinner with journalism students the previous evening. She said a highlight of both conversations was when Ressa showed “how useful data is in proving theories and understanding the sensation of fake news.” Michaels, a staff writer at The Daily Princetonian, wrote a story on Ressa’s March 29 arrest.

“You could hear the passion in her voice on every subject she discussed,” said Sheridan. “I was impressed by her conviction and her enthusiasm for her work in the face of such strong attacks. The highlight for me was that Maria seemed fired up, rather than intimidated by the attacks — she made clear that she would not be scared into silence by the Duterte government and intended to fight his attacks on Rappler every step of the way.”